I like my ‘high concept’ Sci-Fi. 2001 is one of my favourite films and I love most early 70s Sci-Fi. Don’t get me wrong, I love Star Wars and the generations of hi-action films that followed. But I think Sci-Fi is at it’s strongest when the concepts of our place in the Universe are explored through dramatic loosely scientific-based fiction.

Ex Machina falls into this category. A low budget film from Alex Garland, the writer of the excellent 28 Days Later and Sunshine. This is his first outing as a director.

The film starts briskly. The premise deftly laid out in a dialogue-less 2 minute exposition. Caleb (Domhnall Gleeson), a programmer working for a big tech giant wins a company competition to spend a week at the home of the company’s owner Nathan (Oscar Isaac), a reclusive genius.

Here he’s introduced to Ava (Alicia Vikander) an artificial intelligence developed in secret. I quickly transpires that the competition was a front. Caleb was really invited to act as a guinea pig who will help Nathan determine if his construct has reached a level where by it’s convincingly intelligent enough to be accepted by another human.

The basic concept of the film is to explore our understanding of intelligence and sentience through the relationship between Caleb and Ava. Although in many ways it’s pretty standard stuff that’s been a staple of sci-fi since Frankenstein. The burgeoning relationship between the two is handled well.

Like much hi-concept Sci-fi, it’s low budget. Apparently made for only $15 million. Almost the entire film takes place within a few small rooms of the CEOs stylish house, with only three main characters. But what budget there was, has been spent wisely. In my opinion, the design of Ava is one of the best robots put to screen. The design’s helped in part by the great stylised, sensual movements of Alicia. Apparently she’s a trained ballet dancer and every move has a precision and elegance that enhances an already great design.

I have to admit that there was little in the way of surprises. But everything was done well. I’m not sure it will be a Sci-fi classic, but it’s a very enjoyable film.

Tonight’s preview of Ex Machina was part of the Guardian’s ‘Live’ events. So after the film, the writer and director Alex Garland was joined by robotic and AI experts, along with a science writer to discuss the concepts behind the film. 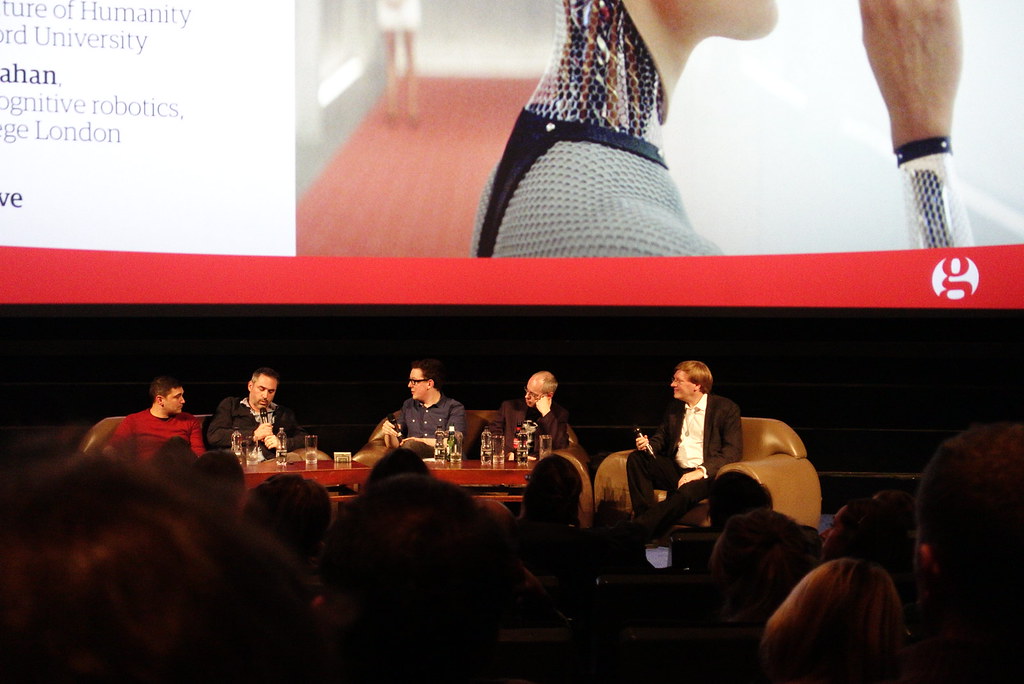 The talk was okay. If anything, I think the director had a better grasp of AI than the Scientists. There was too much talk about consciousness in way that was almost ‘magical’. For me Intelligence is nothing more than a naturally evolving process that comes out of the ability for our neural networks to process the world around us. Nothing more. Yet the Scientists continued to talk in philosophical terms. I thought we’d grown up by now. I have to admit, I would have preferred to have had more audience participation and discussion of the film. But it was still mildly diverting.