There’s going to be a lot of comment on the iPad and it’s capabilities. I thought I’d take a look at it from a ‘Higher Education’ perspective.

The ‘tablet’ form factor is ideally suited to education. Ever since Microsoft released the first Tablet PC it’s been clear to many in education that this interface was the answer to many of our needs. Unfortunately, Windows and the applications it runs, has never fulfilled the promise. Maybe Apple can provide us with the answer.

Laptop usage in Universities has been growing exponentially. Most Universities provide students with access to a wide range of internet based systems and resources, such as email, learning environments, e-books, journals, videos, podcasts etc, along with the wireless infrastructure to enable students to use their own laptop throughout campus. So laptop usage at my University has increased significantly over the last few years.

My first reaction to the iPad was the device when combined with the iBook store and iTunesU, would make the product attractive to Education. But now I’ve had time to think about it, I’m not sure if Apple has developed a product that will (just now) make massive inroads into (UK) Higher Education.

From a design perspective, it looks like Apple have nailed the design. It looks fantastic and it’s core functionality looks great. I can imagine our students finding the portability and user interface perfect for daily use. Whether it’s taking notes in class, using it in group work or even as a data recorder in  a lab, the form factor and the instant access to research materials and our core systems through Safari is perfect in so many ways. 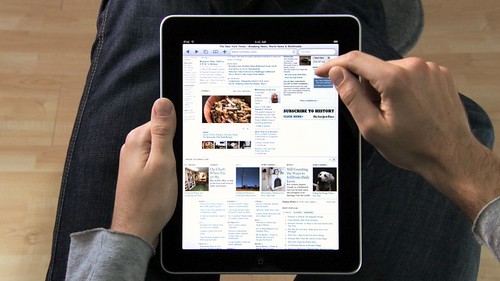 But for me, there’s some killer issues that might stop wide-spread adoption.

Often students in the UK do not need to buy many books. Work for example, provides dozens of copies of ‘core texts’ and provides access to over 50,000 e-books. When students are required to buy texts, they shop around or buy second hand copies from students who studied last year. Apple appear to be positioning the device as the front-end to purchasable content. The iBook store will undoubtably be a massive success, but it’s design appears to be centred around content you intend to keep. Let’s face it, few students will find the ‘4th Edition of Introduction to Thermodynamics’ such an exciting page turner that they will want to keep it. Many in education we’re hoping that Apple’s iBook store would adopt ‘micro payments’ allowing students to purchase just the chapters they need, or even ‘rent’ the book for short periods of time.

In terms of iTunesU, we’re not sure our students use it. There’s some fantastic content on iTunesU, but our academics are still quite traditional. Many still believe that they have to stand in front of a class imparting knowledge through a set of Powerpoint slides. Few as yet, would consider requiring students to consume iTunesU content outside of class so that they can concentrate on exploring ‘understanding’ during face to face time. We know that our lecturers are not unique. UK Higher Education has wasted millions on unused ‘reusable’ content. So I don’t think the ease of access to iTunesU will help sell the product.

There’s also the issue that the iPad is not a ‘computer’. Many courses require specialist software, such as Photoshop, or CAD packages. Also since Microsoft has traditionally supported Universities with relatively cheap campus licenses, and students with cheap Office licenses, Office has been a core desktop application for over a decade. The iPad doesn’t support Office and I can’t see Microsoft developing an iPad version. There’s also the issue that students wouldn’t be able to access all the content we provide in ‘non Apple’ formats, such as Windows media, Real Video and Flash. So it’s likely a student would still require a laptop.

Although the base price seems reasonable, is it cheap enough for students to buy it alongside a laptop? Apple’s UK prices tend to be around $1.25 to a £. If that’s the case, the base product will cost £400. Students can get 15% discount (as can I – probably the biggest advantage of working at a Uni!). So the UK price to students will probably be around £340. Is this cheap enough to purchase as a second computer?

From a staff perspective, the iPad seems to be wide of the mark. All our academic staff have laptops so have the freedom to carry their work round with them. It’s unlikely that we would look to replace staff’s laptops with an iPad. But we already have a definite need for a good tablet, maybe in addition to their main laptop, because University staff have to mark assignments. Something as simple as marking paper submissions has proven to be significantly slower, when staff have to mark electronically. Last year we accepted over 80,000 electronic submissions, this year’s it’s likely to be double that amount. Within 5 years, I think all submissions will be electronic. So we’re desperate for a product with an interface that streamlines the marking workflow.

Windows Tablet PCs provide almost everything we require. But because of a number of small problems, they just don’t work. For example, I’ve not found a single member of staff who likes the software keyboard on Windows. So of most our staff use ‘hybrid’ laptop/tablet PCs. These tend to be underpowered, with poor battery life and awful ergonomics. So staff end up being tied to a desk. There’s also the issue that applications are rarely design to work with a touch based interface, so tend to be difficult to use when you are using a Tablet PC.

It’s clear the interface or iPad is excellent. It was designed from the ground up as touch based operating system. The ergonomics of the product look almost perfect. The size and weight should allow staff to use the product almost anywhere. As always with Apple products, the screen looks fantastic. So staff should be able to sit and mark where ever is convenient.

It looks like iLife has also been revamped with ‘touch’ as the main interface. But the lack of pen interface is disappointing. I’ve always thought that a pen based interface eases the transition of staff from paper to electronic. But I’m starting to think that this may not actually be needed. The iPad’s software keyboard looks fantastic and most iPhone users quickly adjust to typing on it’s tiny keyboard, so the iPad’s big virtual keyboard shouldn’t be a problem. Most staff use the pen to add comments next to student’s mistakes and  the iPhone’s cut and paste mechanism demonstrates how easy it is to highlight sections with your finger. So adding inline comments should be pretty easy.

But there’s one core feature that the first generation iPad is missing – the web camera. Audio visual feedback is becoming a common method for staff to provide richer, personalised feedback to students. Being unable to record video limits how staff could use the iPad and it seem like Apple have intentionally tried to minimise the ‘first gen’ cost. I would expect a camera to appear on the second generation product.

So it’s a bit of a mixed bag really. I’m not sure it will appeal to students and the first gen iPad seems to be missing some core features for use by our staff.

I read a comment earlier that the iPad doesn’t know what it wants to be and although I can see their point, I don’t think it’s true. Yes, it appears like it might be targeted at business and education but I think Apple have a very clear idea of what they want the product to do. They want it to kill off the Kindle and for it to be a consumer device that acts as a front end to their increasing range of stores. To make it easier for consumers to have instant access to digital content, content that Apple control the distribution of. If it finds a place in business or education, then that will be a bonus

A hands-on video from Engadget

Pingback: iPad - is it what education needs? | High technology information

According to AppleInsider, iBooks will initially only be available in the US. So the makes the iPad even less attractive to UK students, who may decide to stick with existing e-book technologies.

Students want the freedom to grow, not be limited by defined boundaries. I also doubt them actually paying for additional books beyond their curriculum requirements.

Infact, they might just be file sharing the PDF files on it. Unless, it will be a fashion statement. ;)

Our local CLC recently bought in some iPads to trial with students, I am a big fan for personal use but am now charged with sorting out their use in a secondary school setting. you might want to check out my blog at ieduc8.blogspot.com I am posting up my thoughts, ideas and some how to’s that you might find useful.

I am currently a student attending a university in Midwest, USA. My University just this past semester initiated a trial program in the science dept. using iPads. They made sure that the course curriculum was available in e-book form, and then they suggested that the students buy an iPad in lieu of buying the books for the class. It is yet to be seen how effective it will be, but I am interested to see what, if any, link there is between using the iPads and better information retention for students.

I think the iPad is a great addition to the educational system. In my my school we have a very nice outside area with outdoor chairs and you see a lot of students reading off their iPads. Look back 10 years ago, those would’ve been books. Tablets are most definitely the future of paper books.